My fireworks adventures.  Most recent at the top.

This is my first attempt at blogging about the fireworks I do each year.  If the pictures will not load, it is probably because your work computer has a firewall blocking file share sites.  I am using a Microsoft Live One Drive site for storing the pictures.  My free web host wants monthly payments to host the pictures.  One Drive is free.  Sorry if they do not show up.  Go home and look at it from there!  The videos are YouTube, so that should work for most people, but they may be blocked too if you have a very strict work environment.  If so, you should not be surfing the web to begin with.

My newest addition to the hardware.  A water fire extinguisher.  It will be perfect for putting out smoldering cakes before they turn into a fire.  Yeah, I broke my own rule about portrait videos!  But it seemed appropriate since this it taller than it wide. 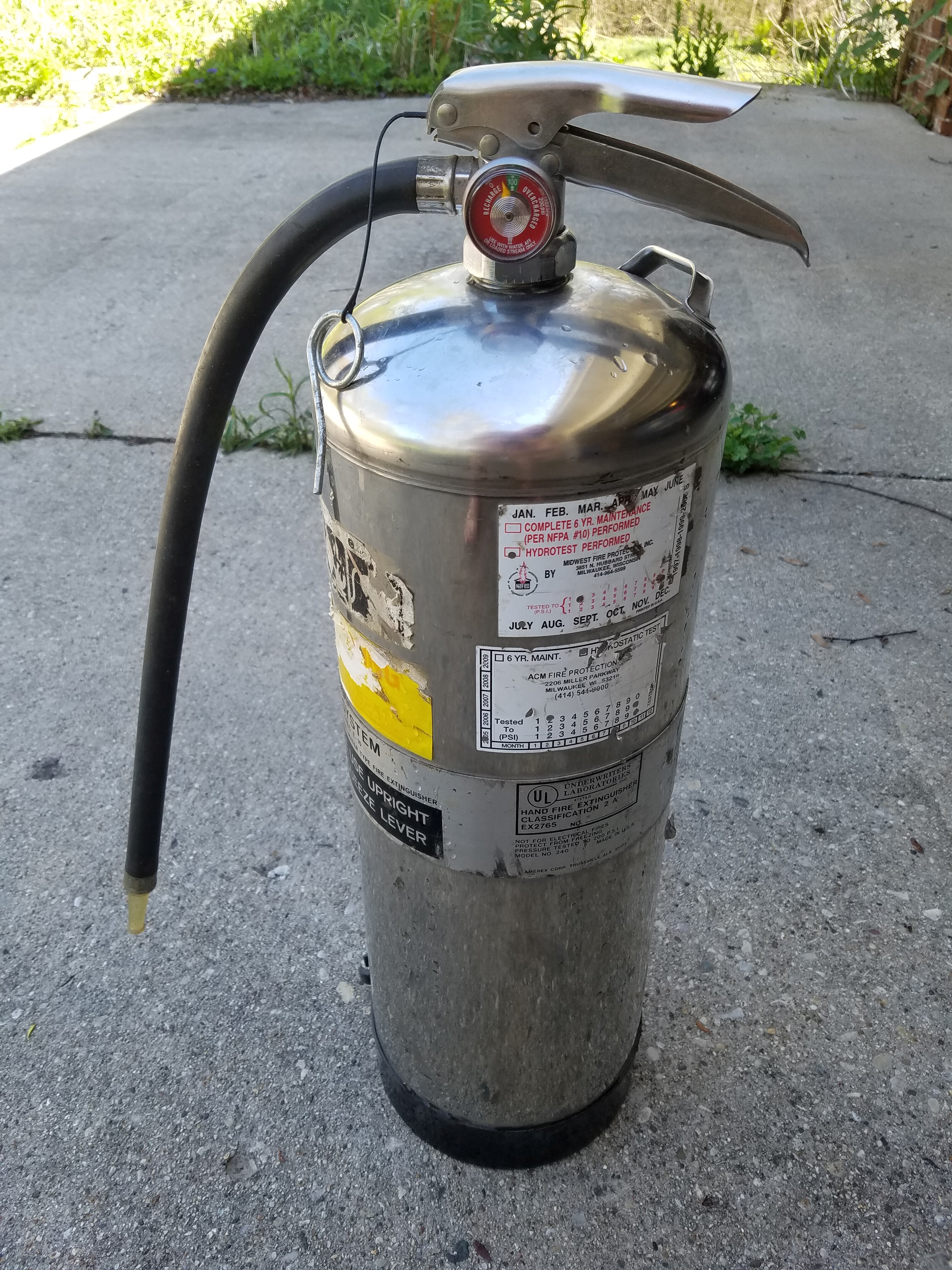 May 2020 Last of my 2019 cakes.  This is Clustering Cicada, Breakthrough, and Thirsty Thursday.  The start is a bit funny since I forgot to turn the transmitter on.  All of these are cakes that had failures lighting last year.  The second one is a Breakthrough that had fired off all but the last 5 tubes.  I added new fuse to light the rest of the tubes, so it is a short fire.  I rotated the camera in the middle to try and do portrait mode since they were going higher than landscape could handle.  That ended up being sideways.  It looks kind of weird!

Here are some pictures of the electronic firing system. 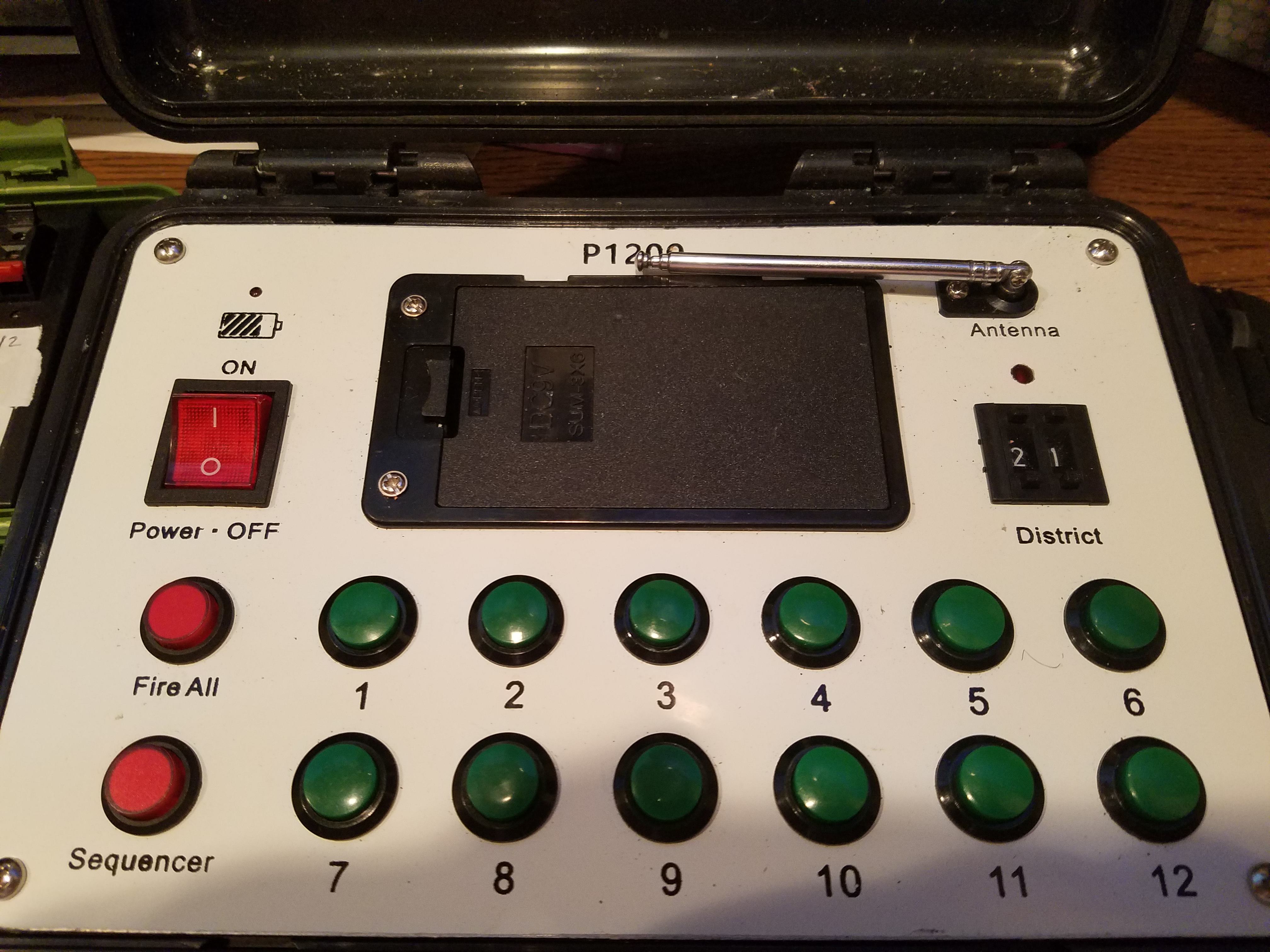 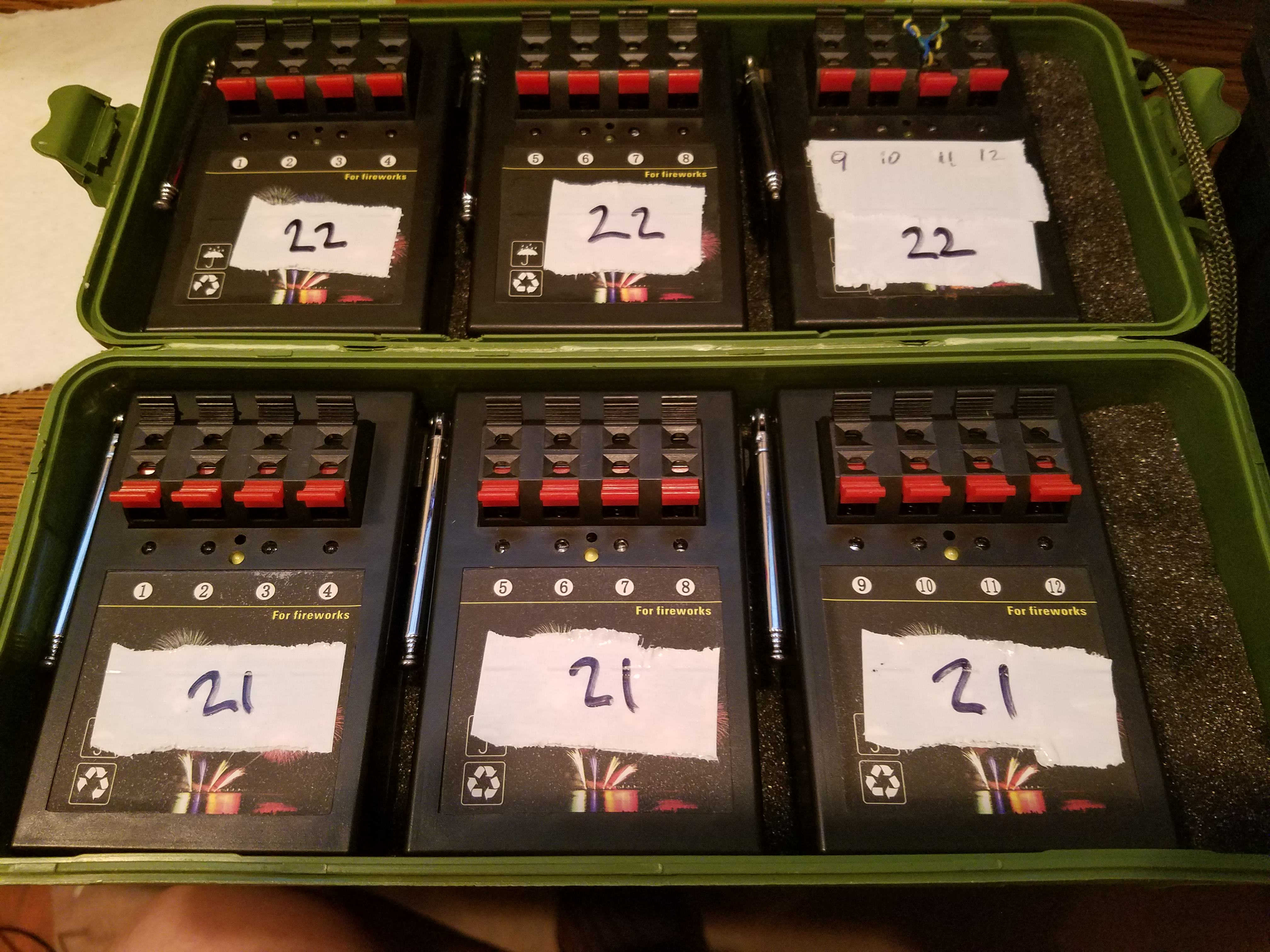 A test of Dominator 1.4pro 62mm shells. One each of RED PEONY, BLUE PEONY, WHITE PEONY, GREEN PEONY, RED STROBE PEONY, WILLOW TO COLOR TIPS, BROCADE TO RED TIPS, RED RING, and BLUE BOWTIE.  They went higher than we expected.  The first one gets out of frame because of that.

Some pictures of the Mortars and Shells.

Testing out a P1200 firing system.  This first one was using a single talon igniter and some sticky match to light 2 things at once.

The 2nd one is putting 2 fuses in a single talon. It failed.  The talon style igniters are easily broken and do not like having 2 things at once.

The 3rd test is the same as 2.  I was more careful putting the 2 fuses in and it worked.  I still don't recommend doing that as it does add risk of failure.

I have decided that I like the cheaper ematches available direct from china on ebay.  They are more reliable and easier to use.  The talons also had a problem with the resistance being too high sometimes.  That made them fail to light.  I got in the habit of measuring resistance after clipping the talons.  About 1 out of 20 were to high and I tossed them out concerned they would not light.

This is what we did with the first year using the P1200 electronic firing system.  We used what we had!  I had a lot of sticky match so we used it.  It works most of the time.  I would not recommend it as there is much more reliable fuse material.  Part of the fun is trying things and seeing how they work.

Pictures of each cluster of fireworks. 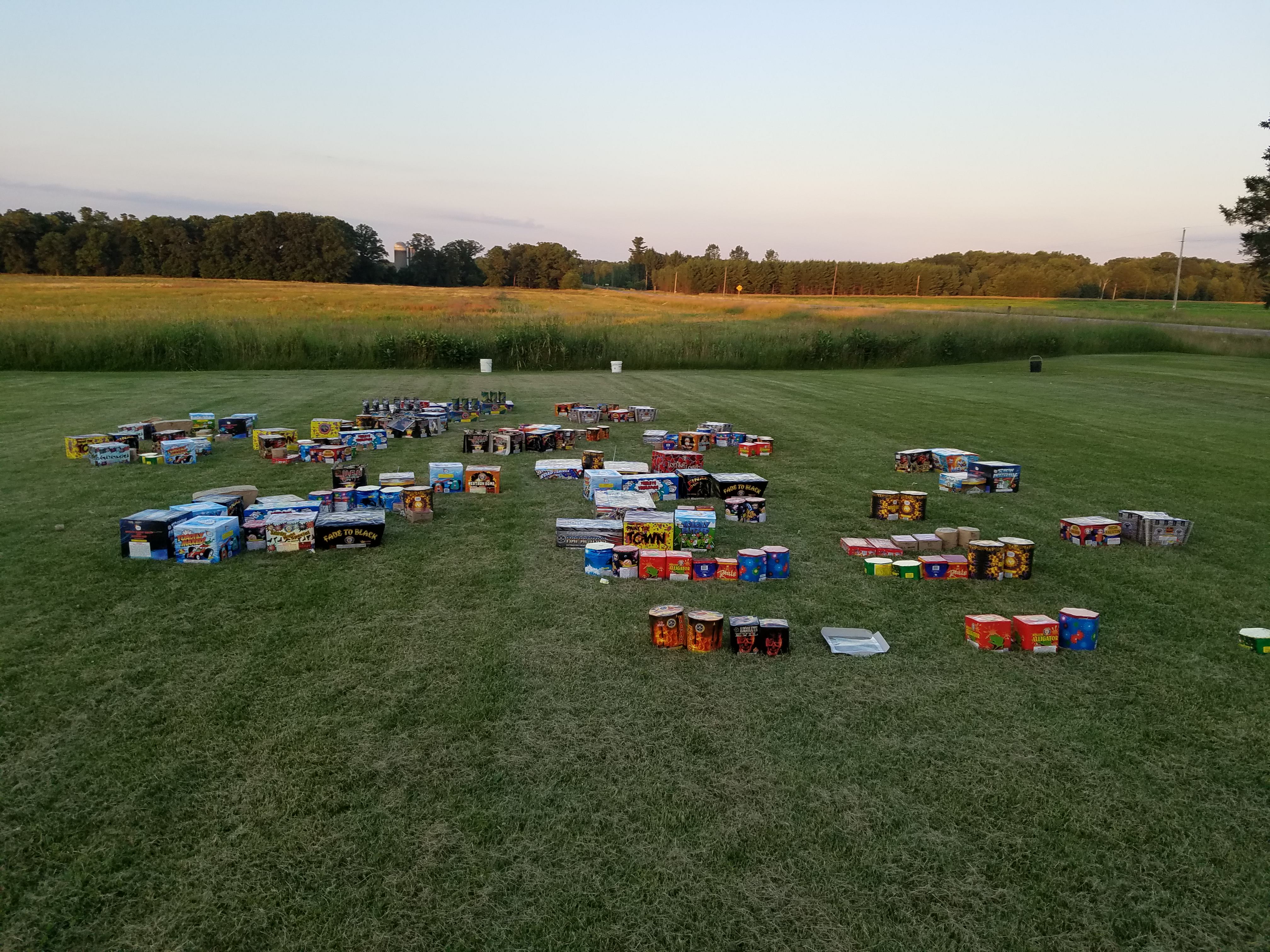 I made my own black powder once to see what it was like.  I did not have a roller, and just pressed it through a screen and then dried it.

I used a method I found online that involved mixing the ingredients and then using spirit of gum, or something like that.  It's been a few years and the exact recipe is lost to time.  I made a paste and pressed it through some 1/2" screen.  I made a dryer for the moist powder using pizza boxes.  I cut a large hole in the top and bottom of each and duct taped nylon screen in the bottom of each.  I put the wet powder "cubes" on the screens and taped 5 boxes on top of each other.  I taped those to a larger square box on the bottom.  I cut a hole in the side of the box and put a ceramic heater in the hole to blow warm air into the box.  That rose through the pizza boxes and dried the powder.  I left that to run overnight outside.  The tree nearby ended up with yellow "sulfur" powder all over it.  The yard smelled like sulfur for a week after that!  It kind of worked, but the powder crumbled too much to easily.  A roller would do a much better job.  I wasn't planning to do a lot of this, so wasn't investing in the hardware.  Just wanted to know what was involved and see if I could make black powder.  Besides, I wanted lift powder most of all, and that requires a lighter charcoal than what I was able to find.

We used it to make cremora Fireballs.  I added some regular gun black powder (FFg) since I did not have enough for the last big one.

This is a video adding some cremora over the top of the powder in the first test.

Put some black powder in the bottom of the coffee can.

Poke a hole in the side and insert a fuse.  The fuse in the first picture is not what I ended up using.  That one was too short.

Bury in the ground.  Put some toilet paper over the powder.

Add some cremora.  I added some stars and powder from a failed shell.  Add more cremora.

Here are the videos of the lighting of a couple of tests using the coffee can.

The first can test.  It was just FFg to set as a baseline.  We had some shells that were duds and added a couple of stars to it.

This is the second test.  I used the home made black powder and double the amount of the test one.  Also had some more stars from duds mixed in.

A 3rd test.  This one used the lift powder from commercial shells.  I salvaged it and wanted to see if it was any better.  This is a smaller amount.  It was not as good.  It needed more powder.

Salvaged lift powder from shells that did not light.

This is the field for the larger show the year I did the fireball finale.

A short sample of the fireworks show.  We were still hand lighting things back then.

Setting up the big 5 gallon pail for a fireball.

Here is a video of that 5 gallon fireball.  It is more like a torch, but still impressive.  The fuse is really long, so there is a lot of darkness in the clip.  This is the finale.  A 5 gallon pail with a couple of inches of black powder, a mix of home made and FFg.  Then about 8 inches of goat milk powder since cremora was a bit more expensive.

I also ride a motorcycle.  One year our HOG chapter was in a 4th of July parade.  When others were tossing candy around we were tossing small boxes of snap-pops. The kids love them!